The Passing of the Torch: Our new sign is up!

It was all about ‘time marching on’ at Bradbury Memorial Center today as our new sign was installed. We thought it to be a good time to tell the story of our building and how it hooks into the history of Lake Havasu City.

We are located at 3317 N. Highway 95 in Havasu, in the old Continental Land real estate building – you may have seen this in our print ads. Our building was built in 1999 as a home for Lenny Matzdorff’s work as a Real Estate Broker and business owner.

It was Lenny and his wife Amy Matzdorff who originally opened its doors, as Lenny already had taken over his father Lyle Matzdorff’s real estate business in 1995.

“When we located out there, there really was nothing out there,” Lenny Matzdorff said.

Lenny recalls some improvements being completed on the property in 2008 followed by an expansion of offices 15 years ago. The most recent addition onto the west side, or the back of our building, houses Bradbury Memorial Center’s new hi-tech crematory, prep room, and garages. The project began in late 2019.

The Matzdorff family has roots that reach far into Havasu’s history. For example, Lenny’s father, Lyle Matzdorff, owned the very first real estate office in Havasu. It was opened 57 years ago, in 1963. However, there is more.

Before that, Lenny’s grandfather, Chet Chenoweth, was within a nucleus of investors who created today’s Crystal Beach, north of Havasu. It is the reason why Lyle, who was Chet Chenoweth’s son-in-law, moved out to Havasu in the first place – to help at the Crystal Beach real estate office location. Lyle was married to Chet Chenoweth’s daughter Stellene for 58 years upon her passing, in Havasu, in September 2018.

Chenoweth Drive, in Havasu, bears Lenny’s grandfather’s namesake simply because he owned property along that stretch of roadway, Lenny said. Chet Chenoweth originally began his own real estate company in Van Nuys, California, and moved to Havasu 62 years ago, in 1958.

Lenny’s father, Lyle, also once occupied the current Mohave County Sheriff’s Office sub-station building, which remains nearby our current location on Highway 95. It, too, was built as a real estate office back in the day.

A few years ago, Lenny crossed paths with Naomi Bradbury-Marchand amid her search for property for her pending funeral home project, Bradbury Memorial Center. At that time, it largely existed only on paper, in emails, and in hope.

Opportunity knocked for Lenny, who was ready to relocate after 20 years in this building.

“I handed it off to her in a good way,” Lenny said. “It was the right opportunity, and it was a good fit for her to take over. What I saw was good and I am really excited for her. She has a good group of people and I have always had confidence in her. I thought it was a good fit and good for the community.”

From those of us here at Bradbury Memorial Center, Lenny, we thank you! We are delighted to be part of your story!

Lenny has moved his businesses of The Flagstone Yard, Graceland Portable Buildings, and 1st Continental Realty and Investment, to his new location at 2945 Maricopa Avenue, in Havasu.

Visit us at www.BradburyMemorialCenter.com on the web or stop in at 3317 N. Highway 95 (the old Continental Land building), in Havasu, for a front-of-house tour! 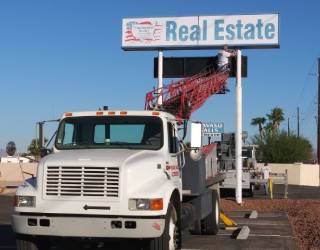 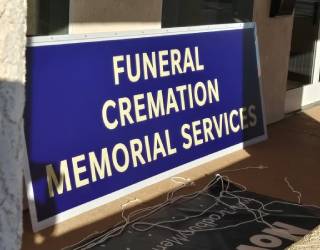 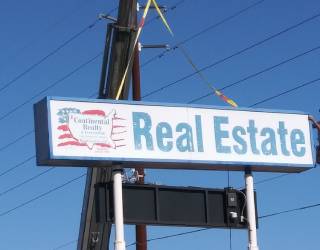