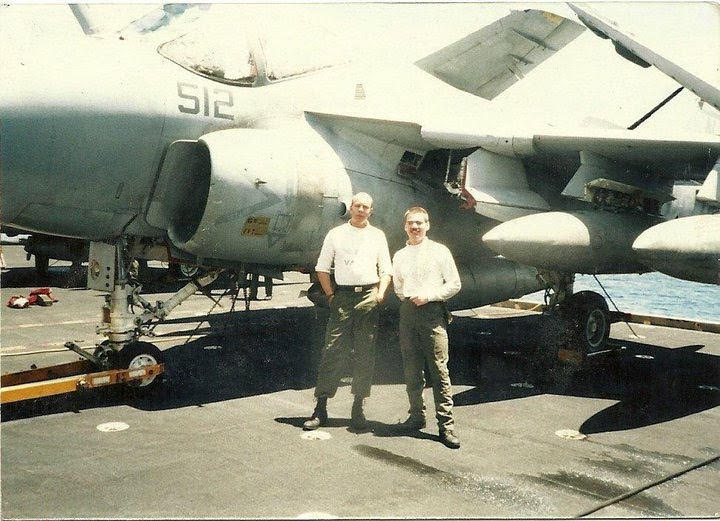 Charles A. Marchand served with the U.S. Navy at the rank of Petty Officer 2nd Class in squadron VA-196, which was located at NAS Whidbey Island, Washington. He served there from 1984-1988.

His squadron was assigned to the USS Constellation for two 7-month cruises and one 3-month cruise. Each time, the squadron was flown to San Diego, Calif., to board the “Connie” at her home base. The cruises led Charles to seashores and ports in Hawaii in the U.S. and in several countries around the globe such as the Philippines, Thailand, Australia, Kenya, and the island of Diego Garcia, among others.

Charles’ job classification was an AE2, or Aviation Electrician, that placed him on the flight deck as a troubleshooter during flight ops. It was the A-6 attack aircraft and the KA-6D tanker aircraft that commanded his attention for 12-14 hour shifts that spanned seven days each week during his cruises. Anything electrical with wiring and cockpit instruments was his specialty.

In 1985, there was an F-14 Tomcat that crashed into the “Connie” while attempting to land on the “Connie” at sea in the Indian Ocean.

“I heard it when it hit,” Charles said. “It crashed into the back of the ship and ripped the landing gear off. He got it back into the air, but the engines were damaged. Both of the air crew ejected, and the plane went into the ocean.”

Charles was in the berthing area, or sleeping quarters, of the ship when the incident occurred and recalls it sounding “like an airplane hitting the ship” on that day. He also recalled the ocean’s 60-foot swells, which most likely caused the miscalculation. The aircraft’s technology simply could not keep up with the ship’s shifting motion.

The USS Constellation’s flight deck, on a typical day, sat roughly 60-feet from the surface of the water. As many as 30 or 40 aircraft were on the flight deck and another 30-40 were in the ship’s hangar bay down below. In all, there were about 80 planes aboard.

In the wake of his military service, Chuck spent 5 ½ years working for Boeing before moving to the Midwest where he met his bride, Naomi Bradbury-Marchand.

According to web sources, the “Connie” was decommissioned on August 7, 2003, at the Naval Air Station North Island in San Diego, Calif., after 41 years of service. She was stricken, or formally removed from the Naval Vessel Register, for reasons against the expenditure of maintenance costs.

In the end, the USS Constellation was scrapped at Brownsville, Texas beginning in early 2015. The scrapping was complete on May 10, 2017.

Charles said he learned of it shortly afterward as he had closely followed the final steps of her fate following her decommission.