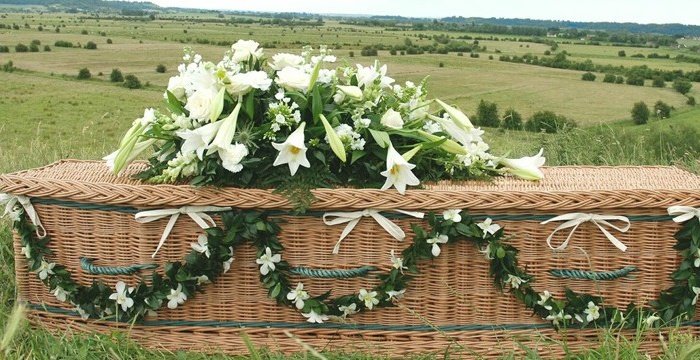 On Earth Day Ideas For An Earth Friendly Funeral

Mary Woodsen a science writer for ten years at Cornell University compiled information regarding cremation and burial. In 2002, she surveyed mortuary schools and funeral directors regarding the quantity of resources they use annually and calculated from there. Woodsen believes these careful calculations provide a conservative estimate and the figures and the numbers may run higher. Though certain areas utilize cremation at a higher rate, traditional funerals are still common in certain parts of the United States.

Regarding embalming, more than 827 thousand gallons of formaldehyde-based embalming fluid is placed into bodies and buried in the ground. These toxic chemicals may possibly leak into the earth.

Every year, conventional burials utilize over 1.6 million tons of reinforced concrete for vaults; more than 90 thousand tons of steel and 27 hundred tons of copper and bronze for caskets; and 14 thousand tons of steel for underground vaults. This equates annually to traditional funerals utilizing enough metal to build a Golden Gate Bridge and enough concrete to build a two-lane highway from New York to Detroit.

Cremation May Not Be As Environmentally Friendly

Cremation also is not as environmentally-friendly as you might think. According to statistics with the National Geographic, the carbon footprint a typical flame-based cremation takes the same amount of energy and has the same emissions of two tanks of gas in an average car.

CANA (Cremation Association of North America) has traditionally been conservative in its projections. However, the number is increasing at a higher rate than usual. CANA anticipates this trend to continue until the national rate exceeds 60 percent. The United States is squarely in the rapid growth period. In Arizona and California the cremation rate is already at 61-70 percent.

The most eco-friendly way to do final disposition according to The Green Burial Council is to return the body to the earth as naturally as possible. This would entail the body not being embalmed. The body is placed in a biodegradable vessel such as wicker, wood, or cloth. Some local cemeteries will allow burial without a concrete outer burial container.

Embalming May Not Be Required for a Funeral

It is not required by law in the state of Arizona to embalm for a funeral. When refrigeration is provided, the body does not have to be filled with chemicals.

Information found on the following sites: