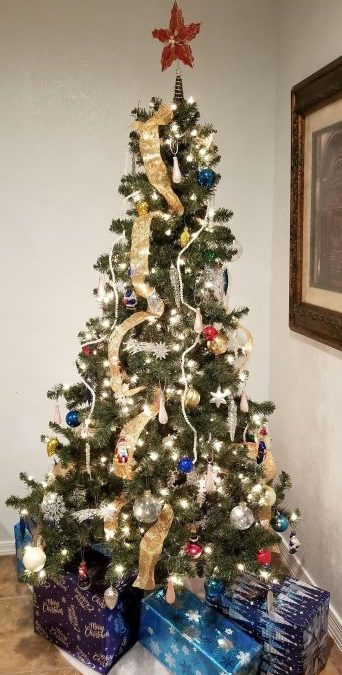 Check out our TREE and Our Top 10 Christmas Fun Facts!

We adore the Christmas and holiday season at Bradbury Memorial Center, and we continue to allow it to hold us spellbound. For us, it is all about the overall meaning, the acts of benevolence, the high spirits, the hope, and the unbridled merriment.

Our Christmas tree theme is ‘Donated’ this season! Our lobby tree and décor this year are donated to us by family and friends. As a team, we have chosen the Jasmine Place Senior Living and Compassus Hospice Holiday Food Drive as our group activity. Their food drive benefits the Lake Havasu Community Food Bank to help with holiday boxes for its recipients. We thought paying it forward was a perfect fit with our own good fortune!

Below is our Being Bradbury Blog story made up of Christmas Fun Facts. It is solely based on our own research. May we present Bradbury Memorial Center’s Evolution of Christmas:

The story of this special day was accounted as Joseph and Mary and how they traveled nearly 100 miles from Nazareth to Bethlehem along the valley of the River Jordan during the Jewish Census. Mary often riding a donkey to conserve her energy for her nearing birth of Jesus, according to the Christian Gospels of Matthew and Luke.

Arriving in Bethlehem, Jesus and Mary were turned away from an inn that was at capacity with the census. The couple soon sought refuge in a humble animal stable and Jesus was born.

As the story goes, wise men, who had journeyed by camel and followed a star, arrived to bestow gifts of gold, frankincense, and myrrh at the infant’s manger.

FUN FACT #1: According to web sources, Christmas itself is rooted in the Jewish holiday of Hanukkah, the festivals of the ancient Greeks, the Druids, and the pagan or folk customs of Europe. Ancient civilizations, such as the Norsemen or the Romans, had similar celebrations of feast and festivities during the Winter Solstice.

At the time of Jesus’ birth, Judaism was the dominant religion of Israel. The Jewish midwinter festival of Hanukkah marks an important part of Jewish history. Its eight days are honored with one more candle lit on the menorah each day at nightfall as the celebration progresses. It is described as a time of remembrance, a celebration of light, and time to give gifts and have fun.

FUN FACT #2: Interestingly, the iconic symbol of Holly predates Christianity altogether. It was something associated with the Sun God and significant in pagan customs. Some ancient religions used holly for protection and hung at doors and windows to ward off evil spirits. It was the Church that injected Christian meaning into the use of Holly, making a symbol for Jesus’ crown of thorns. Legend portrays the holly’s branches woven into a painful crown that was placed on His head by the Roman soldiers who mocked Him. The legend claims the holly berries themselves were, in fact, white at the time and it was Christ’s blood that has left them forever stained crimson.

FUN FACT #3: Medieval Times, or up until the 1400s, Christmastime also was a time for feasting and merrymaking. This is where the ‘12 days of Christmas’ stems from. According to web sources, Medieval Christmas lasted 12 days from Christmas Eve on December 24, until the Epiphany on January 6. The Epiphany is believed to be when Jesus was revealed to the world.

FUN FACT #4: Christmas celebration was banned in the middle 1700s into the early 1800s during a Puritan movement amid the reign of Queen Elizabeth (1558-1603). With a notion that Christmas celebration too closely resembled pagan ritual, the Puritans banned all associated festivities – even decorating with evergreens, lively celebration, and eating mince pies – in lieu of strict moral code, plenty of prayers, and tight adherence to the New Testament.

FUN FACT #5: There was a lull in Christmas celebrations, at least in England, until it returned with gusto during the Victorian Era (1837-1901). It was during this time that many imaginations were captured when Charles Dickens’ beloved story of “A Christmas Carol” made its way into existence.

FUN FACT #6: Traditions of caroling, sending Christmas card tidings by mail (borrowed from St. Valentine’s Day practices), and the emergence of popularizing the Christmas tree followed in the next 50 to 75 years. Furthermore, there is the observance of Advent, which Christians often associate with preparing for the coming of Christ. In turn, Advent wreaths popped up in church traditions everywhere.

FUN FACT #7: The myth of Father Christmas, a.k.a. Santa Claus to the U.S., has origins in Christian and European tradition. His iconic appearance, however, was cemented by American card-makers in the Victorian Era. Traditionally, the myth has Father Christmas visiting houses at midnight on Christmas Eve. Entering by way of the chimney to leave presents and stockings filled with little presents and treats for Christmas. Hence, the stockings many families traditionally hang each year.

FUN FACT #8: A handful of traditions surrounding Father Christmas pre-date Christianity. For instance, his sleigh, pulled by reindeer, is based on Scandinavian mythology. On a different note, the practice of leaving treats and a glass of milk for him on Christmas Eve echoes a time back when pagan sacrifices were made to mark the end of winter and the coming of spring.

FUN FACT #9: America’s love of Santa Claus, whose name Saint Nicholas has ancestry from the Dutch Sinterklass. Saint Nicholas of Myra (modern-day Turkey) is, among other things, the patron saint of sailors. Notoriously speaking, age-old stories of old Saint Nick have him delivering bags of gold coins to a man who could not afford a dowry for his daughters to wed. Some versions even have him dropping the bags of such coins down the chimney.

FUN FACT: #10: Modern-day Christmas as we know it arguably remains the biggest holiday on the calendar. It is an all-inclusive holiday – even outside the realm of any religion – with the main element being the exchange of gifts on Christmas Day.

In our opinion, today’s good nature allows for an array of pies, cookies, chocolates, and celebration with family, friends, neighbors, and coworkers; all amid a storm of ribbons, bows, and brightly wrapped packages beneath a bright, beaming decorated fir tree. We acknowledge that for some, all of this is to honor Jesus’ love for us, and for each other, on His birthday.

In closing, we also enjoy and honor all of the other evolutionary elements and influences that bring us together this time of year, not only to forget about these past long, dark days but also to look ahead with hope.

Hanukkah begins on the evening of Thursday, Dec. 10 this year and lasts through Friday, Dec. 18.